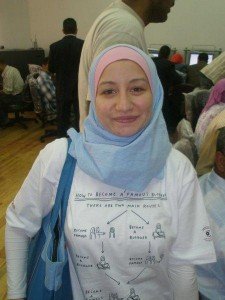 For the past several months we’ve been trying to pull off the first ever course on blogging in Egypt.   There is a lot of concern because bloggers have been the ones who exposed police brutality, sexual harassment and bloggers have given people a voice that is denied in state controlled press.  The news moves forward on blogs.  At the end of Ramadan two years ago several women reported being groped in public, the police denied it so some women bloggers took their cell phones and photographed the groping.  The story was picked up by the satellite channels. Local TV reluctantly followed satellite TV and society reluctantly started dealing with the issue.

We had some fear in sponsoring a blogging course so we marketed it as blogging beyond politics.  That got us attacked by Egypt’s top blogger before the course ever started.  I wrote this in the live blog that I kept during the course. (www.culiveblog.blogspot.com) 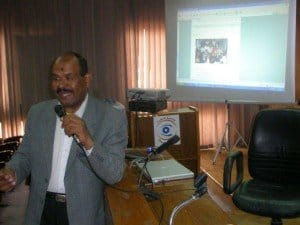 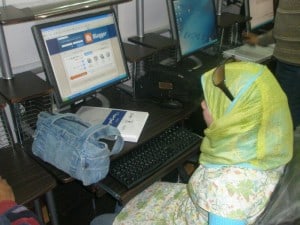 “Thanks to one of Egypt’s foremost bloggers, Wael Abbas, for attacking us in his blog.  We contend that blogging is about life, food, love, kids and, oh yes, activism.  He holds that you have to be an activist to be a blogger. Thanks for the publicity!”

This is exactly the type of publicity we needed.  During the course we had blogs produced on politics, poetry, pottery and lots of things that do not start with a “p”.  One woman’s blog is provocatively entitled “looking for trouble.”  Another is called “My life is a plate of vegetables,” which means, “My life is chaos.” The enthusiasm in the room is palpable.  The participants, all from outside Cairo, are looking at access to the broader world in a new way.  This course actually may be a watershed event in Egyptian media.  Many of the people in the course are rural and they are talking about their lives.  The excitement I am feeling is like the excitement I felt when Suzi and I first attended one of those early community radio meetings.  There are others out there who want to communicate, who have something local to say. 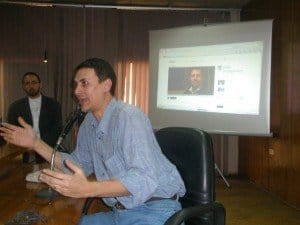 Most of the people in the course are rural.  Something like 40% didn’t really know what blogging was before the start of the course.  Now each of them has a blog on line.

We gave out “t” shirts at start the course.  Some of the women who are fully “covered” proudly wore their blogger “t” shirts over their garments. 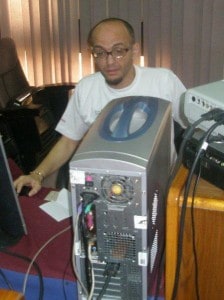 This was a particularly good time to run the course because blogging has hit the local news in a big way.  Bloggers and face book communities, while we were running the course, were organizing a general strike and demonstration for Sunday, April 6, the first day of the workweek and the day after our course ends.  The strike is to protest the high cost of bread, inflation, lack of good water, and under employment.  Something like 40,000 people signed up for the strike on FaceBook.  In a country of 80 million and a city of 20 million that may not be a lot, but it caused a real reaction from the government.

The government put out word on TV and radio that there would be no toleration of these unlicensed demonstrations.  They even sent SMS text messages to mobile phones (I got one) warning us not to demonstrate.  On Sunday CNN reported a general strike.  The streets were empty and about 20% of the shops on the street along that I walk to and from the office were shuttered.

The floor supervisor at the hotel says that no one is out on the streets.  He laughs because there is also a sandstorm blowing, one not predicted.  The sky is golden and the air gritty.  He said that the sand storm and the fear of being arrested have combined to keep so many at home, so in a way the strike is a success.  The supervisor laughs, points out the window and says “Allah sent an angel to help the people, the angel is sand.” 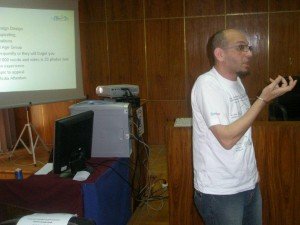 The International Herald Tribune reports the General Strike on the front page of its Monday edition.  It describes businesses closed up, people not showing up for work and thousands of police on the streets.  These are the same as my observations.  They also note that the main opposition didn’t call for this strike; it was, apparently, leaderless.  The combination of blogs, social networking on the web and telephone text messages is having its impact on Egypt.

Sometimes work here is difficult.  There is a lack of freedom to present ideas sometimes, the economy is depressing the bureaucracy numbing.  But this weekend’s training was about optimism.  Sometimes we actually do something here that kind of works.  We will follow the blogs that the rural participants put up.  If they continue to reflect local culture, life, problems and dreams we have a victory.

Earlier in the week in Alexandria Joe and I sat in the café outside the Cecil hotel.  The late afternoon was festival of sensation.  We could not see the sea but we could smell it, hear it and feel it fresh on our faces.  The noises of the street, the smell of the sheesha (tobacco mixed with apple), and the taste of mint tea all teased our senses.  As the sun set the birdsong reached its crescendo in the trees on the main square.  Just then the muezzin led the call to prayer.  “God is great!”  Who could disagree?  At that moment all channels were open.  Joe took a deep breath and held it for a moment with both hands out, palms up.  He let out his breath and said “I LOVE this.”  I understand completely.  I love this.

NOTE: Three Years later during the Arab Spring 6 of the blogs were still active and connecting areas outside Cairo with the activity in the capital.  Here are some of the blog titles: 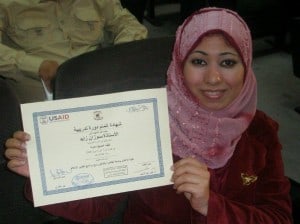 Tbilisi from my window and other views, Sept. 2013

A Professor, An Art Barn and A Lifetime of Enjoyment