On February 11, Hosni Mubarak stepped down as President of Egypt.  Suzi and I were in Doha, Qatar that night and went out on the streets as soon as we heard he had left power.  We were watching the events on Al Jazeera in our hotel room.  I looked out the window and across the bay I saw what looked, to me, like a large number of cars for that time of night.  We could hear a lot of honking so we set out from the hotel on foot to see what was happening.  Doha is a strange place.  To start with only 20% of the population is Qatari, 30% are Americans or Europeans (there are 2 US bases plus lots of oil and gas men.), 40% are from Asia (Bangladeshi, Indian, Filipino) and 10% from other Arab countries.  On that Friday night it looked like that whole 10% must be Egyptian.  Here is what I wrote that night:

We just spent 2 hours on the streets.  It’s wild.  Cars decked out in Egyptian flags, guys dancing, a veiled woman standing through the sun roof of an SUV taking photos on her mobile phone.  Someone is setting off firecrackers under an underpass.  Someone else is playing with the choke on his motorcycle so it backfires.  A set of siblings is riding on a car hood holding little paper Egyptian flags.  A bus stops for a red light, everyone gets out, dances around the bus and gets back in as the light changes.  Not all the demonstrators are Egyptian.  Several carloads of people in Bedouin dress are waving Qatari flags.  Seeing we are Americans a guy flashes the “V” sign and calls “hello mister, have a nice day.” I wonder what’s happening in other Arab capitals. 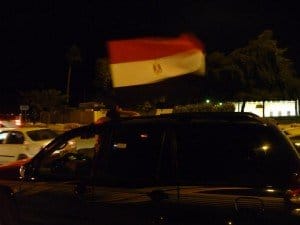 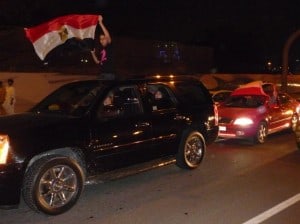 The next day the local English language paper led with the banner “EGYPT WINS.”  The page two headline; “All praise for Al Jazeera,” a little homegrown pride.

A Tale of Two Watches